Evans holds a Ph.D in Modern European History. She teaches a variety of courses in 20th century German history with a primary interest in the history of sexuality. Her book, Life Among the Ruins: Cityscape and Sexuality in Cold War Berlin (Palgrave Macmillan, 2011) explores the rebirth of the city’s various subcultures in the aftermath of World War II. She also writes about same-sex sexuality in Nazi and post-1945 Germany and is finishing a manuscript on pink triangle victims after Hitler. Her next two research projects are contemporary in focus. “Hate 2.0: Combatting Right-Wing Extremism in the Age of Social Technology” is a collaborative project supported by SSHRC that analyzes the role and potential of digital media in countering online hate. I am also exploring the way 1970s and 1980s queer erotic photography acted both as a practice of self-actualization and a claim to sexual freedom in the pre- Aids era..

Coup de Genre: The Trials and Tribulations of Bülent Ersoy 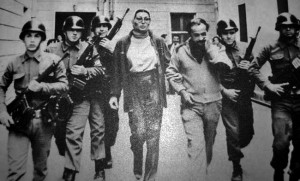 A cooperation with b_books Berlin

﻿This essay/presentation takes as its subject the real and fictional trials of Bülent Ersoy - a fantastically outrageous Turkish transgender singer/film star, whose public gender 'transition' coincided and collided with the 1980 military coup d’état in Turkey and its aftermath. There is a confused but fascinating feature film that came out in 1981, starring Ersoy (playing herself as a man and a woman), about her gender 'crisis', which relies on documentary footage to build sympathy for the star's admittedly unusual and exaggerated persona. Interweaving an analysis of The End of Fame with Bülent Ersoy’s real life trials, Lebow and Ertür explore the trans-queer challenges posed by the star’s public persona, not only to genre and narrative, but to the law itself, allowing a unique perspective on the fitful logics and legal hysterics of the Turkish September 12, 1980 coup d’état.

Dr. Alisa Lebow is a filmmaker and film scholar originally from New York, currently residing in London. Lebow is a Senior Lecturer in Screen Media at Brunel University, teaching documentary theory, history and production. Previously she taught at universities in Bristol, Istanbul, and New York. She has written on documentary theory, with an emphasis on first person film (First Person Jewish, University of Minnesota Press 2008; The Cinema of Me, editor, Wallflower Press 2012; 'First Person Political', forthcoming in BFI Companion to Documentary, 2013). She is co-founder of docIstanbul, the documentary research centre based at Bogazici University, and the organizer of the XVII Visible Evidence conference in Istanbul. As a filmmaker her work includes For the Record: The World Tribunal on Iraq (2007), Treyf (co-directed with Cynthia Madansky, 1998), and Outlaw (1994). ﻿

Başak Ertür is a doctoral candidate in the School of Law at Birkbeck College in London. Her current research focuses on political trials, performance and performativity. She is the editor of Manual for Conspiracy (Sharjah Art Foundation, 2011) and the co-editor of Waiting for the Barbarians: A Tribute to Edward Said (Verso, 2008) with Müge Gürsoy Sökmen. Ertür's published translations into Turkish include Judith Butler’s Gender Trouble and Precarious Life. She is the co-producer and co-director of a documentary entitled For the Record: The World Tribunal on Iraq (2007). 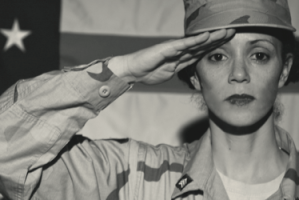 A cooperation with ICI Berlin, NGBK, Institute for Queer Theory﻿﻿

﻿From 2005-2009, Coco Fusco developed a series of projects that explored contemporary military scenarios as intercultural encounters, examining the role of female sexuality as a weapon in the War on Terror. Treating the so- called “theatre of combat” as a dramatic and symbolic space, she concentrated on military prisons. Many of the War on Terror’s most controversial images have emerged from military prisons run by the US military in Iraq, Afghanistan and Cuba, featuring depictions of ritualized humiliation of “enemy combatants.” In her performances, writings and video about this subject, she attempted to analyze these spectacles of subjection and to consider how the American military has capitalized on the growing presence of women in its ranks, adapting originally feminist ideas about sexual assertiveness in order to exploit them as interrogation strategies.

Fusco is an interdisciplinary artist and writer. She has performed, lectured, exhibited, and curated internationally since 1988. Her work combines electronic media and performance in a variety of formats, from staged multi-media performances incorporating large-scale projections and closed-circuit television to live streaming performances on the Internet that invite audiences to chart her course of action through online discussion. Her performances and videos have lately been included in the Mercosul Biennial (2011), and featured in Afro-Modern: Journeys through the Black Atlantic at the Tate Liverpool (2010) and Self as Disappearance at the Centre d’Art Contemporain La Synagogue de Delme (2010). She is an Associate Professor and Director of Intermedia Initiatives at Parsons The New School for Design in New York.﻿

In the blink of an eye: Post-war constructions of (in)visibility of victims and perpetrators 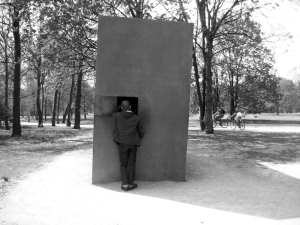 ﻿This presentation explores the opposition between the post-war invisibility of gay survivors of the Nazi regime and the desire of post-war society to portray Nazis as homosexuals. In order to forget that ‘ordinary’ men and women had become perpetrators, the Nazi was portrayed as an outsider: deviant and degenerate. Homosexuality came to signify transgression into evil. Due to their exclusion from post-war memory, some gay survivors blamed themselves for their victimization. Their shame, ongoing persecution, and – above all – post-war silence constitute a disturbing figure: the speechless victim. Using various films, including the film within the Berlin Memorial to Homosexuals persecuted under Nazism, the discussion thus moves between the invisible victim and the post-war image of a perpetrator, both of which served collective and voyeuristic needs.

Dr. Klaus Müller works as an international consultant, including for the United States Holocaust Memorial Museum in Washington DC, where he serves as the Museum’s Representative for Europe. During the conception of the Museum’s permanent Exhibition, he researched and oversaw the inclusion of material documenting the experiences of homosexuals under Nazism. He was the initiator, research director, and associate producer of the award-winning film Paragraph 175 (2000), which profiles gay survivors of Nazi persecution, and assistant director of But I was a Girl (1999), documenting the life of lesbian Dutch resistance fighter andconduct or Frieda Belinfante. Dr. Müller taught film history and the history of sexuality at the International School, University of Amsterdam, Netherlands between 1993-2002.﻿ In 2005, he served as guest editor for a special issue of the American museum journal Curator onmuseums and globalization.﻿

United in Anger. A History of Act Up. 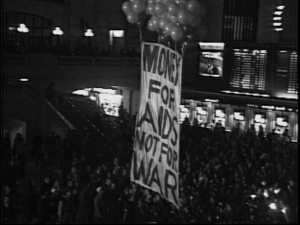 ﻿Screened for the first time in Europe, UNITED IN ANGER: A HISTORY OF ACT UP is the first feature-length documentary about how ACT UP (the AIDS Coalition to Unleash Power), a group of men and women of all races and classes, came together to change the world and save each other’s lives. The film takes the viewer through the planning and execution of a dozen exhilarating major actions that forced the U.S. government and mainstream media to deal with the AIDS crisis. The film reveals how the group’s complex culture – meetings, affinity groups, and approaches to civil disobedience - mingle with profound grief, sexiness, and the incredible energy of ACT UP. Utilizing oral histories, as well as rare archival footage, the film depicts the efforts of ACT UP as it battles corporate greed, social indifference, and government neglect.

Jim Hubbard, who is a co-founder of MIX - the New York Lesbian and Gay Experimental Film/Video Festival is still working on the „ACT UP Oral History Project“ and among his 19 other films are Elegy in the Streets (1989), Two Marches (1991), The Dance (1992) and Memento Mori (1995). „United in Anger“ which he coproduced with critical acclaimed author Sarah Schulman presents video activism and audiovisual testimonies as one way to think about the figure of the “talking eye.” ﻿